Enquire about this speaker 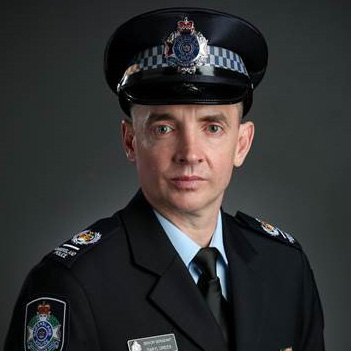 On the 1st of May 2000 I am on duty investigating a routine job – death threats spoken six hours earlier.

I am ambushed by a deranged man and shot in the face and shoulder. I survive and commence a long seven-year road of complex surgeries to physical recovery. But I also start to experience dreams, anxiety, hyperarousal, flashbacks, anger… I think, 'I'm going crazy, there is something wrong with me!'

So, I tell no one. I do not want to be ostracised and labelled a psycho, lunatic or 504 (police job code for 'mental illness'). I am then introduced to Chris Manktelow. Decades earlier as a 19-year-old infantryman, Chris was on patrol in the jungles of Vietnam – point man for his platoon. He trips a boobytrap which showers his torso with shrapnel and he nearly loses his right leg. Chris physically recovers but suffers Post Traumatic Stress Disorder (PTSD). He seeks help and in time goes on to become a psychologist.

Chris has walked the walk of extreme trauma, physically and psychologically, and now as a mental health professional in 2000, he builds trust with me.

In one session he shares – 'I've been there mate, I've had the gun in my mouth, finger on the trigger, ready to end my life, but it does not have to be like that!' I open up, telling him what is really going on with my mental health. Chris is able to make me understand, my psychological reaction to the shooting is a normal response to a very abnormal event, which influences my decision to seek long term treatment for chronic PTSD.

It's time to end the stigma which has surrounded mental health for centuries – a mental health injury or illness is just as real and treatable as a physical one, and should receive the same respect, empathy and compassion. Asking for help, following professional mental health guidance, a nutritious diet, regular exercise, pursuing your passions, and a social and supportive network of family and friends, are the foundations to build and maintain sound mental health.

You can see these attributes at work in my life in this short film dedicated to suicide prevention.

Meet the Speakers at the forefront of Mental Health

Many of us experience constant digital bombardment- the ping of emails, social media alerts or calendar reminders hum in the background of our workdays. To compensate for 'infobesity', the constant overload of information, many of us multi-task. However, multi-tasking is a myth. Research confirms that multitasking not only puts a dent in our productivity but it can also elevate our…
READ MORE

Workplace mental health must be treated by leadership with the same level of operational importance as internet access and functioning electricity because many employees already feel this way. A successful workplace mental health strategy is not like an annual fire drill. It must be embedded into everything we do and co-authored by the people who it affects. How can leadership…
READ MORE

During times of huge change, it can be easy to forget self-care. Each day we should plan activities to improve our physical, emotional, and contribution health. We can’t help others if we aren’t in good shape ourselves. Self-care also links closely with personal resilience and growth. Adopting small habits each day builds our resilience for uncertain times. Self-care isn’t selfish.
READ MORE

From monk to venture capitalist and keynote speaker Kamal Sarma has transformed leaders and teams globally.  In this current climate we are seeing a range of trends and behaviours emerge as we navigate his pandemic.  Kamal is helping clients work on their resilience, leadership and communication and believes that focussing on your Mental Hygiene will positively impact your performance and…
READ MORE

We need to do what our bodies were built to do - and that is to move! The greatest cause of illness and disease is lack of physicality and movement. Lack of physicality means more anxienty, more stress and more overwhelm. Excercise connects our spinal cord to our brains. The more we move the faster we learn - and the…
READ MORE

My top tip to build mental fitness is to find your Gotcha4Life friend, that go-to person who you can open up to & rely on, no matter what, so you never have to worry alone. I believe suicide is the death of isolation and loneliness, so I encourage all Aussies to train their emotional muscle and express their feelings when…
READ MORE

As we all know these are the most unusual times. We are all part of a massive social experiment forced upon us by the pandemic. The keyword here is Adaptation. How do we as individuals and businesses adapt to the crises and challenges that we are facing each day? Some say in Chinese the word crisis also bears the meaning…
READ MORE

Karen Maher is a workplace culture transformer and speaker, she specialises in the prevention of workplace bullying and harassment and increasing psychological safety. In this video, she shares a top tip on how we can strive for mentally healthy workplaces, and guess what? it is simple – it’s all about having a plan.
READ MORE

When people are having trouble coping I find it can be incredibly helpful to have a mantra that regularly changes your outlook. Not in a dramatic ‘lemons into lemonade’ cliched way. I’m talking about acceptance, low-level optimism and incremental change. Breaking things down into bite-sized chunks makes them more manageable and provides us with many more chances to start again…
READ MORE

On the 1st of May 2000 I am on duty investigating a routine job – death threats spoken six hours earlier. I am ambushed by a deranged man and shot in the face and shoulder. I survive and commence a long seven-year road of complex surgeries to physical recovery. But I also start to experience dreams, anxiety, hyperarousal, flashbacks, anger……
READ MORE
Back to top
Back to Top /**/