Cas and Jonesy are two Aussie Explorers constantly pushing the boundaries of human endurance.  Most recently, they made history by completing the longest unsupported polar expedition of all time. In 100 years of polar exploration no-one had EVER walked from the edge of Antarctica to the South Pole and back without assistance. Many had tried, none had succeeded.  After 89 gruelling days they made it back to the coast after having skied 2275km with everything they needed to survive in the harshest environment on Earth.

Four years earlier they Crossed the Ditch - paddling 3318km without assistance across the Tasman sea for another world first. They braved 10 metre swells, howling winds, endured severe food and sleep deprivation and adverse winds and currents. They became the first kayakers to cross the Tasman Sea as well as becoming the longest  transoceanic double kayak expedition. Staggering upon the shores of New Zealand, the adventurers were sunburnt, bearded, underweight, and physically and mentally wasted - but most of all happy to be alive.

The boys are highly regarded as two of Australia's premier public speakers and are currently working on their second book and documentary about their Antarctic expedition.

What sort of young men would attempt such frightful feats?

Earlier in their lives, James and Justin paddled the infamous Bass Strait and became the first to kayak the length of the Murray River, all 2560km. They have run numerous ultra-marathons, attained their yachting crew qualifications and duelled with the open waters under sail. International climbing expeditions have been led in America (Mt McKinley, Alaska and The Nose, El Capitan), New Zealand (notable ascents: Mt Cook and Mt Aspiring) and Papua New Guinea.

The boys have now shared their incredible story with over 150,000 people around the world. Insights into leadership, teamwork, risk management and how to overcome adversity have captivated global audiences. In addition, James has authored a best-selling book, and Justin co-produced an award winning documentary.  James holds a Bachelor of Commerce at the University of Sydney, and has worked both as an Accountant and Management Consultant for Deloitte Touche Tomatsu. Justin has completed a Bachelor of Advanced Science with Honours at the University of New South Wales. They became firm friends whilst at Knox Grammar School in Sydney.  This business and science foundation allows the duo to draw on relevant anecdotes to convey crucial business lessons in their keynote presentations.

No, they are not crazy. They are inspirational, successful and great motivating figures for us all.

Global audiences are demanding to hear the story of how two Aussie mates have succeeded in completing two of the greatest adventures of all time. To date they have shared their story with over 150 000 people. The boys' presentation is the perfect compliment to open or close a conference, motivate staff or provide an inspirational after dinner speech. These two young and savvy adventurers have created two unforgettable presentation. Stunning footage and imagery have been craftily moulded to convey messages that all can learn from.

Daring to dream then riding out the storm On November 13 2007, James and Justin departed Forster, Australia to embark on a journey that no other had ever achieved...62 days later, they arrived in New Plymouth, New Zealand. James Castrission and Justin Jones kayaked 3318km, braved 10 metre swells, howling winds, endured severe food and sleep deprivation and were set off course for over two weeks.

Why do two young successful Aussies sacrifice all to achieve a seemingly impossible dream? How did they go about planning for such an expedition? This intriguing presentation examines the key lessons learnt from the boys- four year journey and is the perfect after dinner presentation. In this mind-blowing account, the boys share with the audience what life on the Tasman was like. Plenty of laughter, banter and description of what it takes to become the first team to ever cross the Tasman by kayak.

To hell and back: A journey across a frozen wasteland After the crossing the Tasman the boys took on an even more audacious challenge - the first ever unsupported trek from the coast of Antarctica to the South Pole and back. Starting with very limited experience they spent months researching, consulting with experts from all round the globe, training in the Arctic and NZ, rehearsing the skills they would need to survive in the highest, driest, windiest and coldest place on Earth.  Pulling loads that started at 160kg and temperatures as cold as -40 C, they battled frostbite, injury, whiteouts, crevasses , gear failure and slow starvation. During the 89 days it took them to ski 2275km without any outside support or assistence they lost a combined 55kg of body weight. Their adventure set a new benchmark and raised the bar of polar exploration globally.

Cas and Jonesy craftily weave themes & lessons they have learnt through a life of extreme adventure into all their presentations. These themes include:
- planning
- risk management
- overcoming adversity
- goal setting
- teamwork
- motivation

Depending on the client's needs, they are able to subtly touch on them or make these themes more explicit.  The boys presentations are enhanced by jaw-dropping video clips and stunning photography from their adventures. The old saying a picture paints a thousand words only partly explains the profound impact their multi-media has. Because much of it is unique and beautifully captured it sticks. People remember the imagery, and the inspiration long after the conference is over.  The length of presentation ranges from 15 minutes (NSW Waratah's) - 90 minute keynote addresses to multi-day workshops.

Funny, inspirational, motivational - an hour with Justin and James makes the spirit soar. They spent 62 days in a leaky boat and proved that with dedication, determination and two very brave hearts, it is possible to achieve the impossible dream, to stare down your greatest fears, to do the undoable and enjoy the pure rewards of achievement and triumph. After spending 62 minutes listening to these two speak, I defy you to not be inspired and embrace your own challenge and reshape your own future.
- The Sunday Telegraph and Sunday Magazine

What an inspirational story. Justin and James seem like ordinary young men, until you hear their story and the journey they accomplished that you realise just how extraordinary they really are. The sheer passion they displayed is uplifting and inspirational. While Justin and James have new found fame, they still remain grounded which only adds to the realness of their story. It is their friendly manner and positive attitude that compliment the incredible footage of their expedition. It was an absolute pleasure to have them present at our conference.
- CommInsure

It is with great enthusiasm that we thank Justin and James for donating their time in opening the Central Coast Red Shield Appeal 2008. Their story of will and survival had every member of the audience on the edge of their seat. Justin and James are an inspiration and example to us all and their presence at the opening event attracted the highest attendance numbers in the event's 10 year history.
- The Salvation Army

Justin and James gave us a timely reminder about digging in when times are tough and never giving up. They spoke to us before training and answered a lot of questions from the team who were eager to know more. By no means what we do goes even close to the what James and Justin have done but there are some general themes that we can take on board from their unbelievable journey. They started optimistically, hit a tough patch, resolved to dig in and get on with it and achieved their goal against the odds. There's a lot we can take from that. They are great guys with an inspirational story and they will always be welcome at the Waratahs.
- Phil Waugh - NSW Waratahs & Australian Wallabies

Justin and James were guest speakers at recent events we held in Melbourne and Sydney. The events were designed to give our lawyers and their client contacts the opportunity to network with their peers in a social setting. James and Justin's presentation was perfect for the occasion. We received some great feedback from our clients including 'inspirational' and 'excellent'.Their ability to describe their incredible adventure in a light hearted and entertaining way was also balanced with clear messages of the importance of planning, teamwork and persistence, giving our clients and lawyers a lot to talk about after the presentation.
- Minter Ellison Lawyers

What an inspirational story. Justin and James seem like ordinary young men, until you hear their story and the journey they accomplished that you realise just how extraordinary they really are. The sheer passion they displayed is uplifting and inspirational.
- Head of Adviser Distribution, CommInsure

Crossing The Ditch gave me the experience of hearing first hand what can be achieved through preparation, commitment, perseverance and a tough attitude. It also showed what special Australian Adventurers James and Justin really are. A truly great story which gets me excited as I feel this may only be the start for these Great Aussie Adventurers.
- Ricky Stuart, Australian Rugby League and Cronulla Sharks Head Coach

They spoke of their adventure with a great balance of facts, emotion and humour, and most importantly, they linked in very well with our conference themes of planning and team-work.
- FosterÃ¢Â€Â™s Group

Justin and James gave us a timely reminder about digging in when times are tough and never giving up. By no means what we do goes even close to the what James and Justin have done but there are some general themes that we can take on board from their unbelievable journey. They are great guys with an inspirational story and they will always be welcome at the Waratahs.
- Phil Waugh, Captain - NSW WARATAHS, Vice Captain - Australian Wallabies

A pair of colourful characters. Underdogs in a race against time, members of that group born with that compulsion to do something crazy, something incredible
- Alec Baldwin - Actor 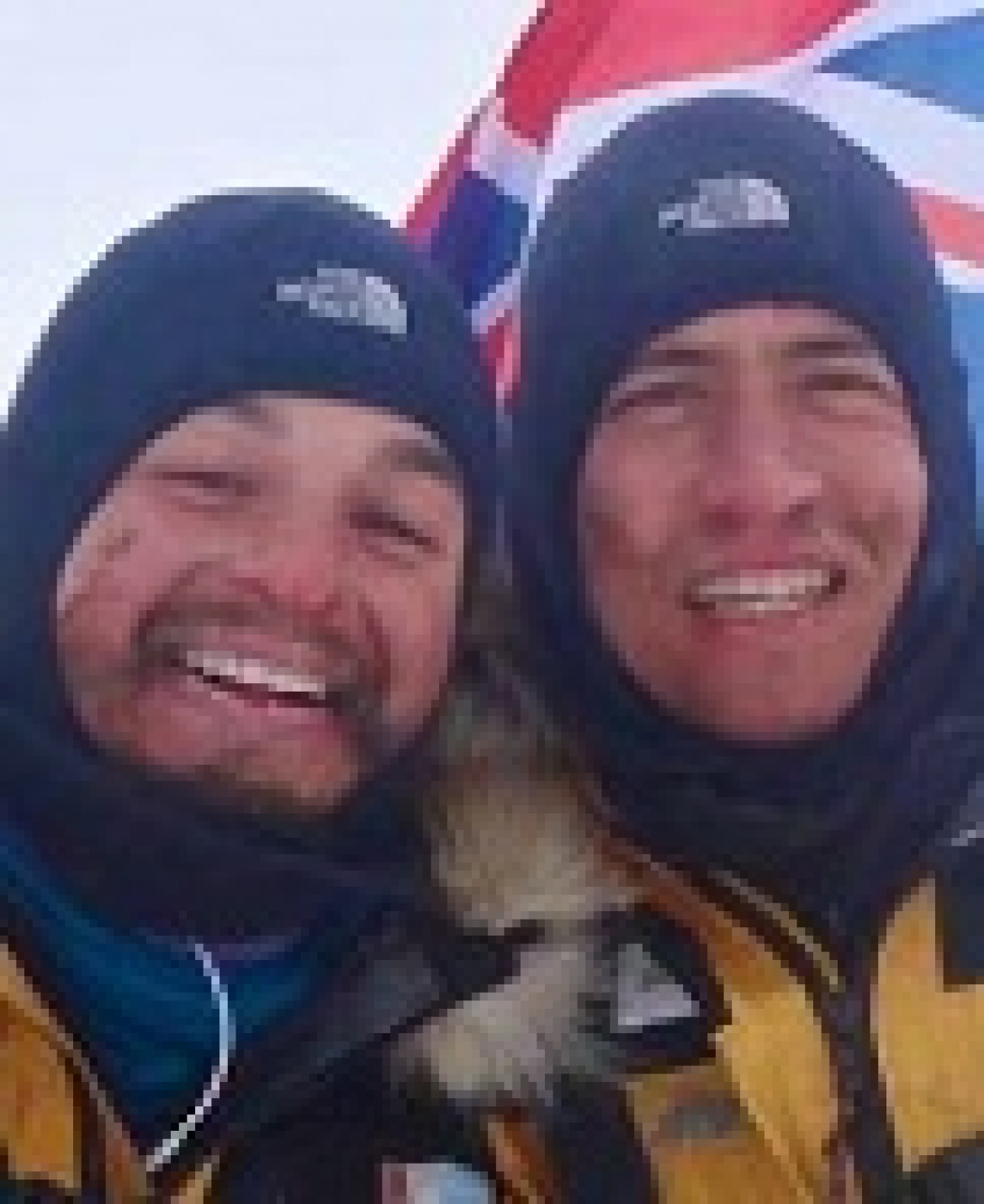