Martha Stewart is one of the world's most recognisable brands and greatest entrepreneurs, having turned her personal passion for catering into the billion-dollar Martha Stewart Living Omnimedia empire.

It is hard for most of us to imagine how Martha Stewart's business could have grown any bigger or any faster, but it is typical that she can imagine it herself. She had already enjoyed successful careers as a fashion model and stockbroker before starting her first catering business. In a few years, a venture she started in her basement kitchen had become a multi-million dollar industry.

Her vision of simple but elegant living has reached the public through dozens of lavishly illustrated best-selling books, through instructional videos and television specials, her own lifestyle magazine, branded housewares, and a daily television program. She has been celebrated as the "Queen of the Home" and America's premier lifestyle authority. She has faced more than her share of challenges as a public person, and as a corporate leader, but she has kept her good humor through crisis and controversy, and that may prove the most remarkable accomplishment of all.

Over the years, Martha Stewart has shown patience and good humor in the face of the criticism and satire that are the inevitable lot of public figures in the mass media, but the quiet stoicism she displayed through her trial and imprisonment - and the perseverance with which she rebuilt her business empire -- have won the admiration of many who never bought her books or watched her television program.  While the company she founded continues to thrive, Martha Stewart has had more influence on how Americans, eat, entertain, and decorate their homes and gardens than any one person in our history.

By all accounts, Martha Kostyra was a hard-working, serious child. A straight-A student, she won a partial scholarship to Barnard College in New York City and worked as a model to help pay expenses. She began her college career intending to study chemistry, but later switched to art, European history and architectural history. Just after her sophomore year, she married Andrew Stewart, a law student. She took a year off from Barnard after their 1961 wedding but returned to graduate with a double major in history and architectural history. After graduation, she continued a successful modeling career, appearing in print and television advertisements for Breck, Clairol, Lifebuoy soap and Tareyton cigarettes until her daughter Alexis was born.

Martha Stewart began a second career as a stockbroker, her father-in-law's profession. Meanwhile, Andrew Stewart founded a publishing house and served as chief executive of several others. When a recession hit Wall Street, Stewart left the brokerage. She and her husband moved to Westport, Connecticut, where they undertook the complete renovation of an 1805 farmhouse on Turkey Hill Road, a location familiar to viewers of her later television programs. She started a catering business, which she ran from the basement of her house. She gained additional business experience managing a gourmet food store in Westport, the Market Basket, which she guided to success. Her catering business also prospered. In only ten years her basement business had become a $1 million enterprise.

Catering publishers' parties in New York City brought her valuable contacts and led to a book deal. Her first book, Martha Stewart's Entertaining, appeared. Co-written with Elizabeth Hawes, the lavishly illustrated volume became the best-selling cookbook since Julia Child's Mastering the Art of French Cooking, 20 years before. More books followed, on hors d'oeuvres, pies, weddings, Christmas, gardening and restoring old houses. In addition to her books, Stewart served as an editor and columnist for the magazine House Beautiful and later as a contributing editor to Family Circle. While her career prospered, her family life changed Martha and Andrew Stewart divorced.

Martha then started her own magazine, Martha Stewart Living, serving as Editor-in-Chief. The publication was an immediate success. Appearances on the Oprah Winfrey and Larry King television programs led to a regular weekly spot on the CBS Early Show as well as a series of holiday specials on the network. She debuted a weekly half-hour television program, also called Martha Stewart Living. Half an hour once a week was not enough for her growing audience, and the program eventually expanded to a daily hour-long broadcast, with half-hour episodes on weekends.

Martha Stewart's television appearances had made her not only a household name, but a one-woman industry. A second magazine, Martha Stewart Weddings, began appearing regularly. Stewart's merchandise and licensing operations were also growing; she signed an advertising and consulting contract with retailer Kmart for a reported $5 million. She purchased all of the publishing, broadcasting, merchandise and licensing ventures bearing her name and consolidated them into a new company, Martha Stewart Living Omnimedia (MSLO). When MSLO went public in 1999, the share price more than doubled on the first day of trading. Martha Stewart retained most of the shares in her company, while serving as Chairman, President and CEO.

Ladies Home Journal named her the third most powerful woman in America. The magazine Martha Stewart Living was selling more than 2 million copies per issue, and her syndicated television program was seen by millions around the world. In June of that year, she accepted an invitation to join the Board of Directors of the New York Stock Exchange, but resigned her seat only four months later, when the U.S. Securities and Exchange Commission accused her of violating insider trading rules. The charges led to a lengthy investigation by the Justice Department. MSLO's share price fell, Stewart's television program was cancelled, and as the company's losses mounted, many doubted it could ever recover.

Although Martha Stewart maintained her innocence of all charges, she was brought to trial. The court dismissed the original accusation of insider trading from which the other charges stemmed, but in March, the jury found her guilty of misleading federal investigators and obstructing an investigation. Her stockbroker and the CEO of the involved company were also convicted. The court ordered Stewart to pay a $30,000 fine and serve a five-month prison sentence. Although she initially planned to appeal her conviction, she ultimately decided to accept the sentence rather than pursue an appeals process that could drag on for years. She was confined for 6 months. Her imprisonment was followed by two years of supervised release, including five months of electronic monitoring.

After her release, Stewart immediately set about rebuilding her business. She began a new daily television program, The Martha Stewart Show, as well as a weekly call-in show on the Sirius satellite radio network. In a new book, The Martha Rules, she shared her strategy for starting and managing a new business. More new books followed, including The Martha Stewart Baking Handbook and Homekeeping Handbook. She made regular appearances on The Today Show, while her own program was nominated for six daytime Emmy Awards. Within a year of her release, Martha Stewart Living Omnimedia had returned to profitability.

Today MSLO operates in four main areas: publishing, Internet, broadcasting and merchandising, all of which cross-promote content and products. In addition to an ever-expanding library of book titles, the publishing arm issues the magazines Martha Stewart Living, Weddings, Everyday Food and Whole Living, as well as special issues on family and holiday themes. MSLO's Internet presence, marthastewart.com, features content from Martha's television and radio programs, as well as magazine content, while the magazines Whole Living and Weddings have web sites of their own.

The broadcasting arm includes the PBS program Everyday Food and the Martha Stewart Living radio program. MSLO announced that the syndicated Martha Stewart Show, recorded before a live television audience, would move to the Hallmark Channel, to air every morning, followed by MSLO programs featuring Stewart's daughter Alexis and other Stewart associates. Martha Stewart has also expanded her merchandise lines, creating product lines for Home Depot, Sears, Macy's and Wal-Mart, a Martha Stewart brand of wine and a line of fresh and frozen foods. MSLO has even expanded into home construction, building and selling houses modeled after Stewart's homes in New York and Maine. 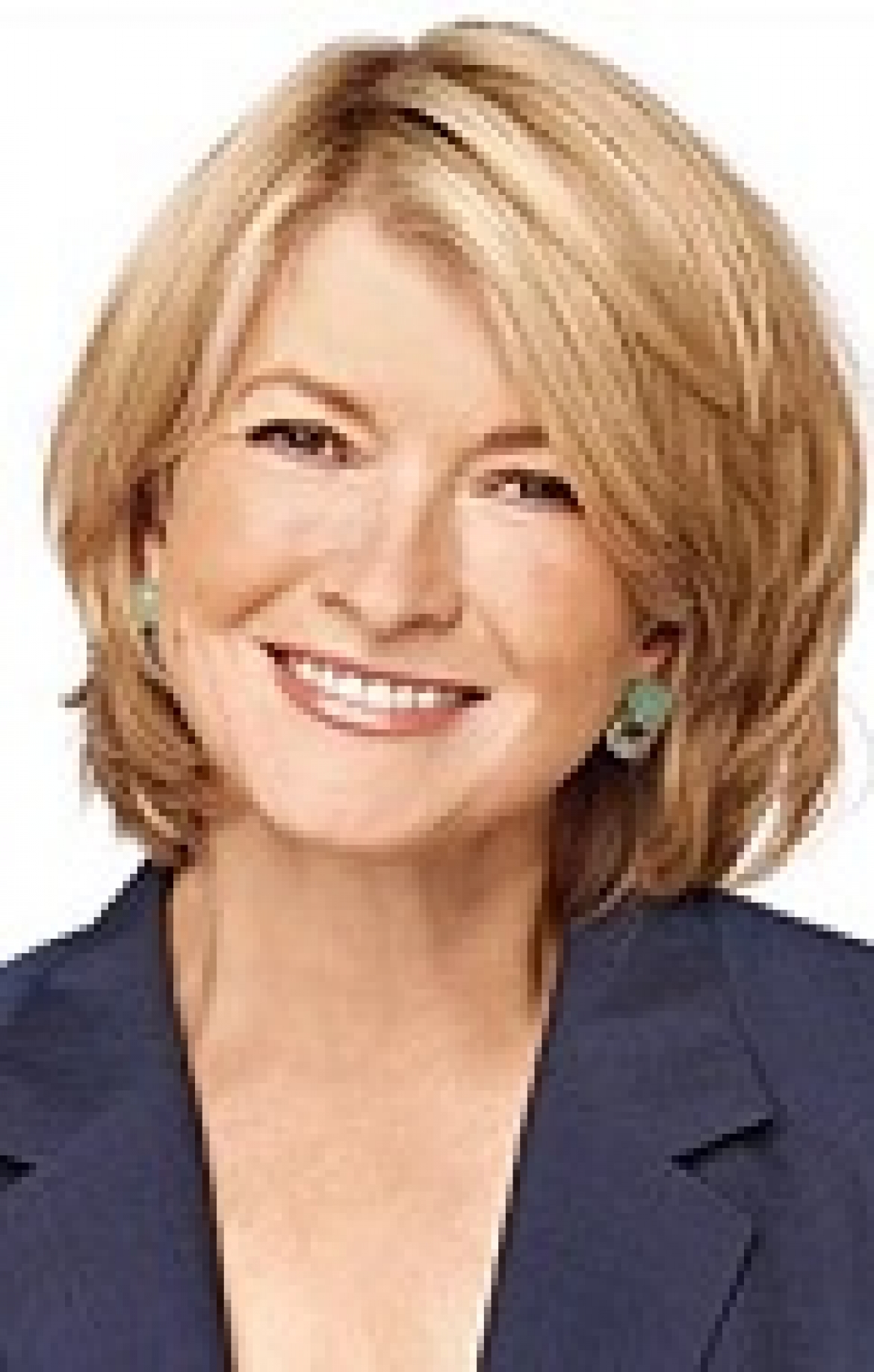