Peter Diamandis is focused on driving breakthroughs in products, companies and industries. He is passionate about solving some of the world's grand challenges. If you're interested in driving and incentivizing breakthrough thinking within your company or industry; or if you're interested getting experts around the world motivated to solve your insolvable problems, you need to create the proper incentives and establish clear, measurable and objective goals.  Peter Diamandis can help:

He is the world's foremost expert in incentivized innovation. The art of incentivize smart and talented people within your company or those experts around the world to focus on solving your grand challenges. He has worked with Fortune 100 companies, government leaders and captains of industry over the past 15 years. Diamandis is the winner of the Economist 'No Boundaries' award for 'meta-innovation' driving innovation in the way people innovate.  He is also the winner of the Arthur C. Clarke Award for Innovation, the Heinlein Award, the Lindbergh Award, the Wired RAVE Award, the Neil Armstrong Award, and the World Technology Award.

Diamandis inspires and moves audiences to action. His message is clear: there is no challenge that cannot be overcome. It is a matter of having a clear objective goal, clarity of what you are measuring and incentivizing the right community to solve your challenge. Using personal, in-depth and inspirational stories, Diamandis has been called 'one of the best speakers ever' by numerous CEO-level audiences. He has received accolades from an impressively diverse list of listeners: Google, Microsoft, the United Nations, Facebook, TED, PhRMAs CEO Conference, Autodesk and Activision-Blizzard to name a few. Diamandis is a frequent contributor to CNN, CNBC and MSNBC.

Dr. Diamandis is the Founder, Chairman and CEO of the X PRIZE Foundation, a non-profit focused on designing and launching large incentive prizes to drive radical breakthroughs for the benefit of humanity. Best known for the $10 million Ansari X PRIZE for private spaceflight, the Foundation is now launching prizes in four groups: Exploration, Life Sciences, Energy & Environment, and Education/Global Development. Today the X PRIZE has three active prizes: The $10M Archon X PRIZE for Genomics, the $30M Google Lunar X PRIZE and the $1.4M Wendy Schmidt Oil Cleanup X CHALLENGE. Diamandis and the X PRIZE have been hired by the following groups to create incentivized innovation: Google, Cisco, Shell, Progressive Insurance, NASA, US Department of Energy, and the US Department of Transportation to name a few.

Topic 1: Creating a Culture of Innovation & Breakthroughs
Based on the success of the Ansari X PRIZE (which stimulated the creation of a billion-dollar private spaceflight industry) and the success of additional X PRIZEs in Life Sciences, Energy, Environment and Exploration, Diamandis explains how to incentivize breakthroughs in your company and industry. Diamandis explains how traditional thinking, risk aversion and incrementalism will cause the demise of companies unable to cope with the coming decades of disruptive innovation.

Diamandis explains how the rapid growth of key exponential technologies (Nano, Info, Bio) are empowering individuals and small companies to do what only governments were able to achieve only a few decades ago. Such technologies will drive a period of significant disruption and/or opportunity depending on the company's mindset. Diamandis' ultimate message is that companies cannot remain stagnant. They must evolve or they will die. You are either disrupting your own business model or will be disrupted by others.

Diamandis is the New York Times bestselling author of ABUNDANCE - The Future Is Better Than You Think! (#1 on Amazon, #2 on NYTimes), in which he lays out how we will soon be able to meet and exceed the basic needs of every man, woman and child on the planet. Abundance for all is within our grasp. This bold, contrarian view, backed up by exhaustive research, introduces our near-term future, where exponentially growing technologies and three other powerful forces are conspiring to better the lives of billions. An antidote to pessimism by tech entrepreneur-turned-philanthropist Peter H. Diamandis.

Since the dawn of humanity, a privileged few have lived in stark contrast to the hardscrabble majority. Conventional wisdom says this gap cannot be closed. But it is closing - fast. The authors document how four forces - exponential technologies, the DIY innovator, the Technophilanthropist, and the Rising Billion - are conspiring to solve our biggest problems. Abundance establishes hard targets for change and lays out a strategic roadmap for governments, industry and entrepreneurs, giving us plenty of reason for optimism.

In his keynote address, Diamandis examines human need by category - water, food, energy, healthcare, education, communication and freedom - and addresses how a range of powerful technologies such as synthetic biology, embedded networks and cloud computing, AI and robotics, biotechnology and medicine are transforming what was once scarce into something abundant.

Providing abundance is humanity's grandest challenge - this is a keynote about how we rise to meet it.

Topic 3: Exponential Technologies Causing Disruptive Innovation
Diamandis is the co-Founder and Executive Chairman of Singularity University (SU), the leading institution for the study of exponentially growing technologies. SU was founded with the support of Google, Autodesk, Genetech, Nokia, Cisco and NASA and is located in Silicon Valley.

From his perspective of Executive Chairman, Diamandis provides passionate, insightful and extremely useful keynotes on the impact of the following exponentially growing technologies:

Diamandis discusses how breakthroughs in these areas will transform products, companies, industries and even society over the next 20 years. He provides key insights on how human society has transformed from 'Local & Linear' to one that is now 'Global & Exponential', and how this change is accelerating disruptive stress or disruptive opportunity depending on the company's point of view. These technologies are also leading to the greatest epoch of wealth creation ever, where new billion-dollar startups are coming out of seemingly nowhere at the same time that 50- and 100-year-old, billion-dollar companies are going out of business.

Diamandis also discusses the explosion of data that is transforming how companies operate and how to tap into big data with a brand new set of exponential 'organization tools' that allow companies to make 100-fold improvements in their R&D strategies.

Topic 4: Transforming Your Company from 'Linear' to 'Exponential'.

Competition for many of America's Fortune 500 companies is no longer coming from China and India. Today it's coming from two guys in a garage with a startup leveraging exponentially growing technologies. YouTube went from a startup on Chad Hurley's personal credit cards to being purchased by Google for $1.4 billion in less than 18 months. Groupon leaped from conception to $6 billion in value in less than two years.

At the same time that billion-dollar startups are materializing - seemingly out of nowhere - hundred-year-old industry cornerstone companies are crumbling. Kodak had a market cap of $28 billion with 140,000 employees. In 2012, it went bankrupt. That same year, another company in the photography business called Instagram was purchased by Facebook for $1 billion. The company, which had been founded only a year earlier, had just 13 employees.

For most of recorded history, a community's productivity was a function of its human power - humans to hunt, to gather and to build. Double the number of people gathering crops and you double your output. Next, humanity domesticated beasts of burden like the ox and the horse, and output increased. But still the equation was linear. Double the beasts, double the output. As the corporation came into existence and the industrial age dawned, for the first time output took a huge leap. Now a single individual could operate machinery doing the work of 10 horses or 100 laborers. With this increased output came prosperity for many and an increase in the standard for living.

The 20th century witnessed a doubling of the human lifespan and a tripling of inflation-adjusted per capita for every nation on Earth. During this phase of human productivity, the limiting resource of growth went from the number of bodies (human or animal) to the number of machines and the capital expense deployed. Doubling the number of factories meant twice the output. Companies grew larger and larger, spanning the globe and dominating sectors. With size came increased probability of reach, domination and ultimately success. But such growth took time and large capital investments. None of this was cheap, and the complexity of large-scale hiring efforts and the difficulties of designing, building and delivering new equipment meant that implementation timelines were measured in the better part of a decade. On more than one occasion, CEOs and boards of directors found themselves 'betting the company' on a new direction, making huge capital expense investments measured in hundreds of millions or billions of dollars. Pharmaceutical companies, aerospace companies, automotive companies and energy companies routinely found themselves making investments whose returns might not be known for nearly a decade.

But exponential growth and exponential organizations are different. Rather than use armies of people or large physical plants, Exponential Organizations focus on utilizing information technologies, taking that which was once physical in nature and dematerializing it into our lives. Physical equipment like Nikon cameras, Magellan GPS devices, libraries of books or music albums now simply become apps on our smartphone. An Exponential Organization is one whose impact (or output) is disproportionally large compared to its number of employees because of its use of networks, automation and/or its leveraging of the crowd.

Peter's keynote blew me away. I've been presenting for years and do it for a living, and Peter is at the top of the game. His personality shines through and is extremely authentic. He is a pretty amazing dude!
- Sr. Vice President, Cisco

Peter's presentation is world-class. One of the best I've had the pleasure to watch. His passion and vision about innovation, creativity and a future of abundance is infectious. Diamandis offers a critical perspective that everyone - from CEO to innovator - needs to hear. His insights on innovation, technology and the future are a breath of fresh air, a perfect antidote to the latest depressing headlines. If you're looking for someone to help you chart your future, Peter is the perfect choice.
- Sir Ken Robinson, Author, Speaker, (most viewed TED Talk) and International Leader in Education & Creativity

Peter gave the featured Keynote to my first All-Executive meeting in my new role as CEO and made it a huge success. Several employees came up to me later to say that he was the best speaker we've ever had. His presentation on innovation and exponential technologies was very thought-provoking discussion and extremely valued.
- CEO, NextEra Energy

Diamandis is one of the most passionate and dynamic speakers today. His knowledge and leadership in exponential technologies and crowdsourcing tools such as incentive prizes helps senior management teams understand how to transform linear organisations into exponential ones. If you want to energise your senior management team and give them an understanding of the future, bring Diamandis in as your keynote speaker.
- Lt. Governor, California

If you ever have the chance to see Peter Diamandis speak, run don't walk to get a seat. Awesome inspiration.
- General Manager, NFL Digital Media 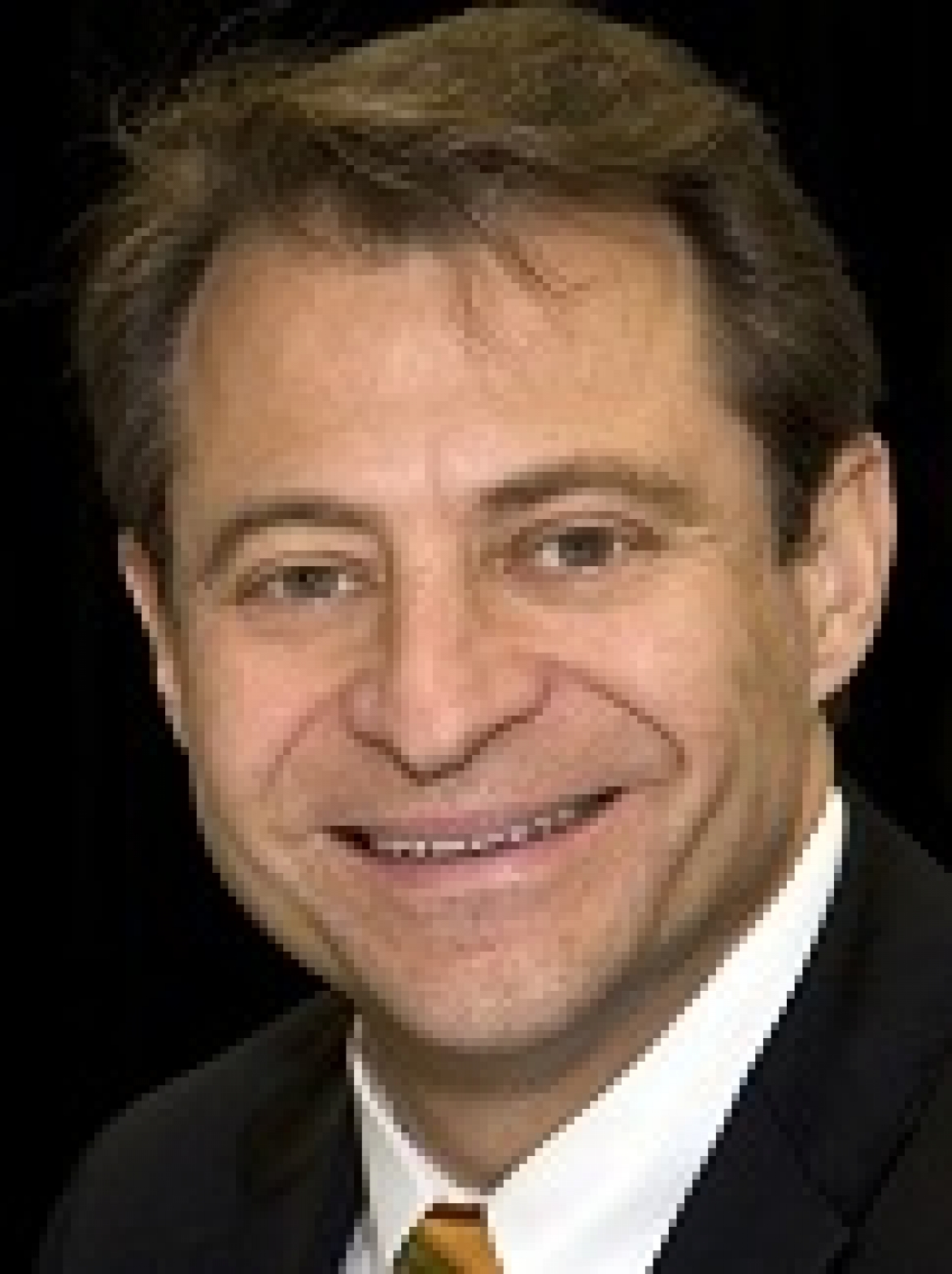 Peter Diamandis - Abundance is our future

Peter Diamandis - Abundance is our future