Trevor Hendy first became known through the sport of Ironman racing. He is unchallenged as 'the greatest Ironman in the world'. The pride of Australian Surf Lifesaving, Trevor's list of sporting records will likely never be matched.

Competing for the Surfers Paradise Club on the Gold Coast, Trevor won six Australian Open Ironman titles surpassing Grant Kenny's record. He claimed his fourth consecutive World Ironman title in the United Kingdom in 1994. This feat was regarded miraculous considering the world title is only held every 2nd year and involves many rounds for qualification.

Given the list of possible outcomes, it was this winning streak that first stamped Trevor's ability to consistently feel his way through any situation as something special indeed (an ability that would come in very handy in his later corporate life). This was driven home also in 1994 when Trevor swept away all before him, creating a unique record of five 1st placings and two 2nd placings out of 7 professional starts in that season's Ironman Super Series, leaving him unquestionably at the pinnacle of his sport.

After this, Trevor switched to Kayaking in a bid to refresh his desire to compete at the top level. Having achieved a rare feat of completing his sporting goals at a young age, Trevor, armed with a new set of goals and a new sport to conquer set about tackling a steep learning curve with a new freshness and a desire to paddle at the Sydney Olympics. He went on to make it to the 1998 World Kayak/Canoe Championships and European World Cup series, finishing with several top 5 places and along the way, having a real taste of the teamwork required (another ability that would be later called on) to challenge the world kayaking elite in the hotly contested K4 1000m event. He also secured two more Australian championships along the way. After making it into a very small and hard to crack Australian Kayaking side, he had fulfilled his dream of once again representing his Country, albeit this time in an entirely different sport.

After returning from the World Kayaking Championships, having done the hard yards and seemingly only a stones throw from the Sydney Olympics, Trevor stunned the sporting world by announcing his retirement from Professional sport, ending his dormant Ironman career and his Olympic campaign in the process. It was then that we came to understand that a new Trevor Hendy had emerged. "I simply realised that I loved helping people win their gold medal more than I loved chasing my own".

While coaching the next couple of World Ironman Champions Trevor certainly flew a few more times, competitively, himself, winning World and Australian titles in the new millennium, admittedly without training for them, stating "it's amazing what you can do, when you truly feel good about yourself".

Trevor Hendy is a legend in his sport. No other competitor has reached his heights. Together with his down to earth attitude he became a role model for all Australians. This was recognized when he was awarded as a member of the Order of Australia. He has also been inducted into the Surf Life Saving, Gold Coast and Australian Sporting Hall of Fame.

Trevor ultimately achieved, in a funny way, two goals in one, when he was selected as the expert kayaking commentator for the Channel 7 coverage of the Sydney Olympics, in a unique way supporting his old team mates in their own medal success.

Trevor now continues to tour the country on the speaking circuit furthering his own learning and sharing everywhere he can, both from the Old sporting anecdotes to the new inspiration that he has found in living his life after sport and challenging himself to push further into his own life purpose and big picture.

It is here that after a lot of personal success, his share of personal challenges followed by a long period of study and a lot of catch up time with his family, Trevor has become highly sort after for his ability to speak, from experience, about living a life of accomplishment, balance and deep personal satisfaction, not to mention climbing the highest heights.

Trevor fills his days Training and mentoring a handful of clients with no prejudice towards skill or achievement level.  Whilst he loves to guide anyone who wants to make change, his client list also includes some of the Worlds sporting and business elite. He mixes his experience as a counselor, life coach, sporting coach and elite athlete to guide everyone he works with, to bigger and better things. He specializes in connecting with his clients at a deep enough level to find the personal negatives holding them back and unleash the passion they need to 'go the whole way'.  He is a renowned and highly sort after problem solver, specializing in conflict resolution and works regularly with large corporate organizations to inspire and unite their teams with an emphasis on creating a wave of success and riding it.  He personally customizes his corporate programs and guides his clients with the care and commitment he would give a family member.

Trevor firmly believes that there is a solution to any problem or downturn in results and has assembled a fine team of skilled and passionate individuals to be able to go into any organization and create an immediate turnaround.

Trevor returned to his great passion of Professional Ironman racing as a Channel 10 Commentator and Consultant for the Newly launched Kellogg's Nutri-Grain Ironman Series.

Trevor still lives on the Gold Coast, Australia and travels the world working in the field of Truth and Wellness and speaking on/for awareness, motivational and community based projects. He summarizes his life philosophy when he says 'Bring it into Now and never underestimate the power of who you are'.

TrevorÃ¢Â€Â™s presentation was engaging, motivational and entertaining. The team found it easy to relate his message to both their business and personal lives. He was able to articulate that the drivers behind sports people are transferable to any walk of life. The passion, honesty and openness of his presentation ensured his message and moral to the story was clearly articulated. Trevor was very generous with his time, staying post the formalities and speaking personally with those looking for the opportunity.
- General Manager Commonwealth Bank

Trevor Hendy was a guest speaker at my monthly Business Excellence Breakfasts held in Tweed and Gold Coast several months ago. The presenters are the best in Australia and many are of international status. The impact Trevor made on the large audience of 100 leading business people was incredibly powerful. He is the most outstanding World and Australian ironman of his time, but he was able to explain to the group a system to be successful in business and overcome obstacles that they could relate to instantly. He held their attention from his opening words with his inspirational stories that made a real connection with the audience. No other speaker over the years has made this brilliant an impact to this mix of businessman. He has a speaking style that relates well to any group and makes a real connection with his audience. Trevor is a real champion who has the gift of being able to transfer his methodology of success to an audience that will leave with the motivation to strive for success and overcome any hurdles.
- Convenor of Business Excellence Events

We engaged Trevor to run a motivational session for us in the early stages of some training for our retention team. Trevor truly delivered to brief and then some. He was energetic, enthusiastic, focused and present. He engaged with the entire audience and made the content relevant and meaningful. The participants were all overwhelmed with his honestly, humbleness, great sense of humor and motivating stories. Indeed I found myself questioning my own practices and checking in with my own guiding principles as a result. His topic was relevant and Trevor was really able to make the content relevant to the audience Ã¢Â€Â“ tapping into the brief he was given, but also adding commentary that made it his own. We all engaged with Trevor and were enthralled with his ability to make us want to do and be better. Trevor was generous with his time, gave the team the upmost respect by preparing and meeting them in their world. I enjoyed every minute of the session and found myself wanting to listen for longer. I would have no hesitation in recommending Trevor to other organizations looking for a versatile speaker who is able to adjust his life experiences and content to meet the needs of his clients.
- Group Manager, Learning and People, AUSTAR Entertainment Pty Limited

I had the pleasure of hearing Trevor Hendy speak to an audience of mostly women, about his mission in life now to empower people to learn from their mistakes and walk through their difficulties to discover who they really are. This was Australia's legend of sport; the greatest Ironman in the world; the pride of Australian Surf Lifesaving Ã¢Â€Â“ standing before us showing a soft side, an endearing vulnerability that won our hearts as he revealed that despite all the fame and glory in his life, it didnÃ¢Â€Â™t make him happy. Let me tell you, Trevor won many hearts at this seminar. He exudes love and passion for what heÃ¢Â€Â™s doing Ã¢Â€Â“ empowering people to maximize their human potential. Whilst his story covers love and values, it started with awareness: that his life was no longer fulfilling; something was missing Ã¢Â€Â“ and he tuned in, truly inspirational.
- Di Gorry, Author Ã¢Â€Â“ "I choose to be me. I choose to be me Ã¢Â€Â¦.so can You"

I have the pleasure of managing a team of sales professionals from diverse backgrounds and geographies. Our team members consist of both male & female, from the CBD of cities, to little country towns and from all different walks of life. Annually I bring the team together to provide business updates, essential training and networking opportunities. In 2011 my aim was to introduce a culture of Self Belief and Self-Motivation. With this mantra in mind I was provided the opportunity to invite Trevor Hendy to present to my team. Trevor's presentation was engaging, motivational and entertaining. The team found it easy to relate his message to both their business and personal lives. In delivering the story of his journey to becoming the Australian Ironman Champion his message to the team was clear, if you are willing to commit to the hard work and make the sacrifices necessary, then you can really achieve anything you put your mind too. Trevor was able to articulate that the drivers behind sports people are transferable to any walk of life. The passion, honesty and openness of his presentation ensured his message and moral to the story was clearly articulated. Trevor was very generous with his time, staying post the formalities and speaking personally with those looking for the opportunity. Thank you again for sharing your story and inspiration with my team.
- General Manager, Commonwealth Bank, Regional Business and Private Banking. 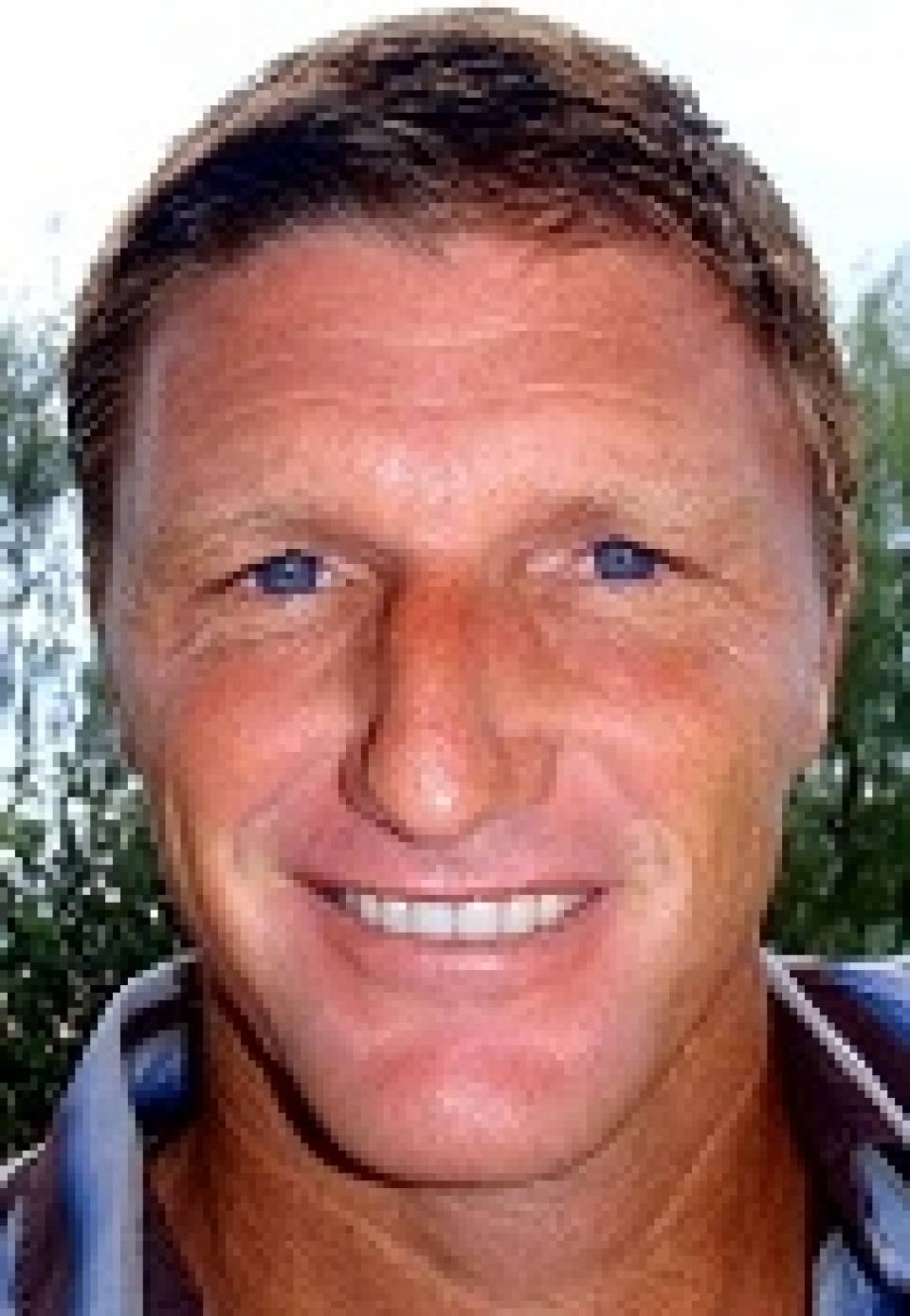